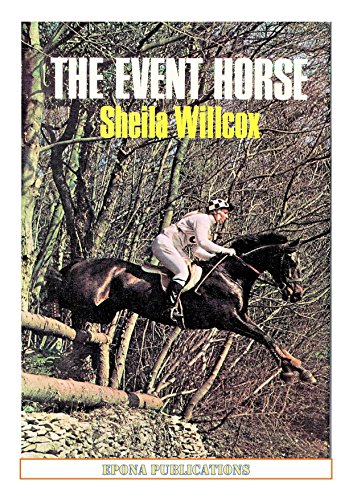 The original edition of The Event Horse was published in 1973. The Foreward was written by HRH Princess Anne who states that this is the first book that deals with all three phases of a three-day event. Since then many books have been written on eventing but this edition might be viewed as a classic, and most of the information in it is as relevant today as it was nearly fifty years ago. Sheila Willcox was, without doubt, one of the most talented horse people of the last century. She combined huge determination and courage with meticulous attention to detail and expert knowledge in all things pertaining to the care and training of horses, whether they were to event, do dressage, show jump or simply shine in the show ring.
She wrote this text book after her disastrous fall in 1971 when she broke her back and was never to event again. She is credited with being the first ‘professional’ when it came to three-day eventing and she still holds the unbeaten record of having won Badminton three years in a row. Mary King trained with her for three years as a teenager and said that she learnt more from Sheila Willcox than from any other single person.
This book was written when the second day of a three-day event included two phases of roads and tracks and one phase of steeplechase as well as the cross-country phase. This format was changed around 2002 and now only cross-country is run over the second day. It is rather fascinating to read about the somewhat more arduous format of three-day events in the early days. Sheila Willcox had 17 years of experience riding in eventing and her words of wisdom should not be forgotten or overlooked.