The Push: A Climber's Search for the Path (English Edition) por Tommy Caldwell 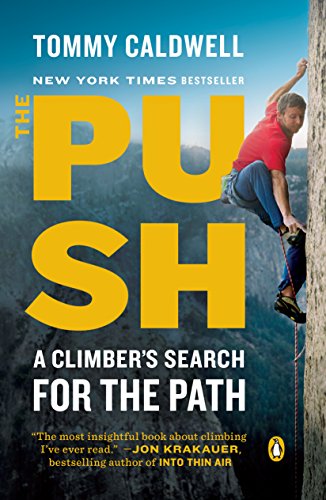 Tommy Caldwell con The Push: A Climber's Search for the Path (English Edition)

“The rarest of adventure reads:  it thrills with colorful details of courage and perseverance but it enriches readers with an absolutely captivating glimpse into how a simple yet unwavering resolve can turn adversity into reward.” —The Denver Post

A finalist for the Boardman Tasker Award for Mountain Literature

On January 14, 2015, Tommy Caldwell, along with his partner, Kevin Jorgeson, summited what is widely regarded as the hardest climb in history—Yosemite’s nearly vertical 3,000-foot Dawn Wall, after nineteen days on the route. Caldwell’s odds-defying feat—the subject of the documentary film The Dawn Wall to be released nationwide in September—was the culmination of an entire lifetime of pushing himself to his limits as an athlete.

This engrossing memoir chronicles the journey of a boy with a fanatical mountain-guide father who was determined to instill toughness in his son to a teen whose obsessive nature drove him to the top of the sport-climbing circuit. Caldwell’s affinity for adventure then led him to the vertigo-inducing and little understood world of big wall free climbing. But his evolution as a climber was not without challenges; in his early twenties, he was held hostage by militants in a harrowing ordeal in the mountains of Kyrgyzstan. Soon after, he lost his left index finger in an accident. Later his wife, and main climbing partner, left him. Caldwell emerged from these hardships with a renewed sense of purpose and determination. He set his sights on free climbing El Capitan’s biggest, steepest, blankest face—the Dawn Wall. This epic assault took more than seven years, during which time Caldwell redefined the sport, found love again, and became a father.

The Push is an arresting story of focus, drive, motivation, endurance, and transformation, a book that will appeal to anyone seeking to overcome fear and doubt, cultivate perseverance, turn failure into growth, and find connection with family and with the natural world.